African Penguin numbers have rapidly decreased over the past 50 years, and the rate has accelerated over the last decade. Reasons for this decrease in numbers include lack of prey, predation by seals and sharks, and oil spills. Although lots of research have been conducted since 2008 on the impact of the small pelagic fishery on the reduced availability of prey through the island closure experiment, the link between penguin population decreases and fishing is still unclear. Concerns were emerging that the approach was too narrowly focused on fishing as a cause of these population decreases, without considering other potential factors. 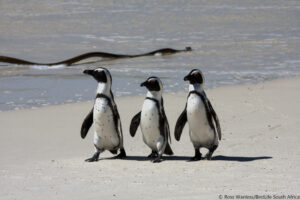 The proposal for a “blue sky thinking” workshop was put forward by Christina Hagen and Dr Ross Wanless from BirdLife South Africa to address these concerns, and the workshop became a reality in August 2015. The idea for this workshop was to establish a closer relationship between fishing companies, seabird researchers, marine ecologists and government scientists, by collectively discussing new ways to think about the problem of prey availability. The target participants were fishing industry representatives with varying roles in the industry, seabird, seal and fish biologists, and representatives from the Departments of Environmental Affairs (DEA) and Agriculture, Forestry and Fisheries DAFF). The workshop was chaired by Johann Augustyn, and was funded by the Responsible Fisheries Alliance (RFA) and the South African Pelagic Fishing Industry Association.

The discussion was guided by several questions that centered around the fishing industry’s perceptions on fish stock availability and catchability, sustainability of the fishing industry, as well as vessel interactions with seabirds and seals. The comments and observations by the workshop attendees could be summarized in three broad categories:

This workshop paved the way forward for improved communication between the fishing industry, conservationists, scientists, and government. It further highlighted the need for fishermen to be integrated into DAFF’s small pelagic working groups. Another outcome of the workshop was the suggestion that a fishery observer programme be re-established for the pelagic fishery. The outcomes of the meeting was recorded in a report which was circulated to the relevant government representatives and the RFA to improve the conservation of the African Penguin.

Review of the observer programme and observer data: 2002-2009

A decade of the Ecosystems Approach to Fisheries in South Africa, 2005-2015