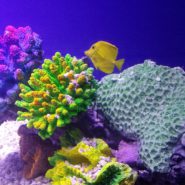 The South African government has proposed 22 new marine protected areas (MPAs) within South Africa’s Exclusive Economic Zone (EEZ) through the rollout of Operation Phakisa. These proposed MPAs have been designed to protect important marine ecosystems and habitats that are necessary to ensure the sustainability of South Africa’s marine living resources. Each MPA has set management objectives, and collectively they will increase South Africa’s formally protected ocean space from 0.5% to 5%.

This proposed network of MPAs has generated a fair amount of controversy within both the scientific community and the fishing industry. A debate took place on Friday 26 August at the Two Oceans Aquarium, Cape Town, which allowed different industry representatives, environmental scientists, academics and community members to express their views and concerns regarding the proposed MPA expansion. The debate was hosted by the South African Deep Sea Trawling Industry Association (SADSTIA) and was titled “South Africa’s Marine Protected Area (MPA) expansion strategy – do we need additional MPAs?” Professor Ray Hilborn (University of Washington) and Professor Doug Butterworth (University of Cape Town), who do not support MPA expansion, debated this issue with Professor Colin Attwood (University of Cape Town) and Dr Jean Harris (Head of Scientific Services, Ezemvelo KZN Wildlife), both strong proponents of MPAs. The debate was brilliantly chaired by Professor Kevern Cochrane.

Prof Hilborn opened the debate by introducing the notion that successful fisheries management is more advantageous to ecosystem health than the establishment of MPAs. According to his research, MPAs simply displace fishing effort elsewhere, are not a solution to the problem of overfishing, and are only effective for certain species. He says fisheries management, if done correctly, can maintain fish abundance, regulate by-catch and protect sensitive habitats throughout the exclusive economic zone (EEZ). His presentation focused strongly on the concept that MPAs are a carry-over from the “terrestrial national park” mindset, which he claims are failed strategies, since most of the biodiversity is outside the protected areas. Prof Hilborn suggested that a focus be placed on altering human behaviour and improving fisheries management to ensure sustainable ecosystems.

Dr Harris started her rebuttal by reminding the audience of South Africa’s international obligations to protect its terrestrial and marine environments, as well as the multiple objectives of MPAs and the need for integrated oceans management to meet various objectives – taking habitat, ecosystems and people into consideration. She strongly focused on the need for additional MPAs within South Africa’s current network, citing various studies that promote the apparent successes of MPAs in protecting fish stocks and oceanic habitats.

Prof Butterworth supported many of Prof Hilborn’s statements and ideas. In addition, he questioned the setting of specific targets by the Convention on Biological Diversity and the South African government, calling them irrelevant if the target does not provide convincing reasons for the establishment of the MPA. As a renowned specialist of the South African fishing industry, he is well-positioned to identify the current crisis within South African fisheries, and offered the solution of time-area closures instead of no-take MPAs, as time-area closures are more flexible than a strict no-take MPA.

Prof Attwood, meanwhile, related fishing and MPAs to the Schaefer production model, in which managers aim to manage the biomass so it stays at the point of maximum sustainable yield (MSY). According to Prof Attwood, in reality, fisheries management is complex and information is never perfect, especially when managing a fishery that catches multiple species. He likened MPAs to insurance policies; the premium is the reduction in fish catch due to the MPA but the benefit is the protection against fishing above the MSY. He further emphasised that fishing reduces genetic variability within stocks since fishing generally targets the biggest, most productive fish. According to Prof Attwood, MPAs are the best way to preserve natural selection and genetic variability.

After the presentations, a lively discussion took place between the audience and the panelists. Despite some significant areas of disagreement, there was, surprisingly, extensive common ground between the two sides, highlighting the fact that there are common solutions that can be sought with improved collaboration between all key stakeholders in the sector. Prof Hilborn concluded the session with the pertinent observation that, “We are dealing with a complex trade-off between producing food and protecting biodiversity.”

This debate illustrated the need that exists for industry, academics, scientists and communities to communicate more often and more clearly with each other. MPAs are a valuable tool for the protection of habitats and certain species, and along with effective fisheries management and holistic marine spatial planning, will play a crucial role in the future management of our oceans.

Presentations of the debate can be found on the SADSTIA website here: http://www.sadstia.co.za/news/latestnews#29-august-2016-world-renowned-fisheries-scientist-ray-hilborn-visits-south-africa