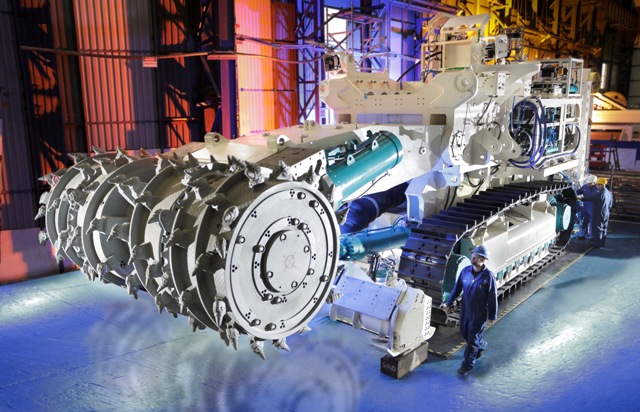 Imagine a piece of technology with the power to dredge – remove or suck up – the earth on the bottom of the seabed at a rate of more than 100 000 m2 per day. Its dredge-head of around 11 m wide is dragged on the seafloor, cutting a trench with its cutting teeth, while its water jets crush hard sediment that is then suctioned by a tube where it is distilled. Larger sediment is separated from fine particulates, which is released back into a water column that creates a giant plume of sediment, equivalent to a dust cloud, burying and smothering a massive expanse of seabed ecosystems. The potential result: destruction of seabed organisms and habitats; direct harm caused to breeding, spawning, and feeding of fish species; the flight of pelagic and demersal organisms from disturbance, noise and pollution; and reduced light penetration impacting on photosynthesis – to name but a few.

This disturbing and ugly picture is the reality that awaits South Africans if government does not agree to place an urgent moratorium on three prospecting rights for marine phosphate over a considerable portion of South Africa’s marine environment. The rights, two owned by Green Flash Trading and one by Diamond Fields International, were granted by the Department of Mineral Resources (DMR) in 2012 and 2014 and it appears that not many South Africans know about it or understand the consequences.

The Responsible Fisheries Alliance (RFA) is part of the Safeguard our Seabed Coalition, a group of fishing, environmental and environmental justice organisations led by the Centre for Environmental Rights (CER). The coalition believes that  a moratorium on bulk marine sediment mining should be established until, at minimum, a strategic environmental assessment has been concluded so that knock-on effects of impacts on established and renewable industries, such as fishing is known. Furthermore, our current legal and governance framework has to be amended to deal with bulk marine sediment mining.

The CER states that in addition to granting these rights, there are a number of other indications that the government plans to develop a bulk seabed mining industry in South Africa. The Department of International Relations and Cooperation (DIRCO) and DMR have announced the development of a Seabed Mining Roadmap aimed at developing the seabed mining industry.

The question anyone who cares about the environment could ask is, “Why would government want to allow this?” The socio-economic impacts of seabed mining have not been assessed and preliminary assessments show the considerable and irreversible impacts of bulk marine sediment or phosphate mining on marine ecosystems and fishery resources. In a controversial move, the government of Namibia has recently issued an environmental clearance certificate to Namibia Marine Phosphate, a crucial step towards the start of a mining project 120 km off the coast of Walvis Bay.

Our seabed is rich with phosphorus bearing sediments, which is abundant along the outer shelf of the seafloor and extend to the shelf edge and slope break. All three applications for prospecting rights have asserted that phosphate is critical for food security and terrestrial phosphate supplies are dwindling, whilst demand is increasing. However, it’s expected that most if not all of the phosphate, if mined, would be exported as South Africa currently only uses about 50% of the existing supply and even if there were a shortage locally, it is possible to recycle phosphate.

A critical truth, though, is that not only could phosphate mining destroy the ocean environment, it poses a direct threat to the fishing industry that has operated for approximately 120 years, providing food security and creating thousands of jobs. This, as the marine phosphate prospecting areas directly overlap with fishing footprints of several fisheries, including hake longline, tuna pole, west coast rock lobster, small pelagic and chokka squid sector. Notably, the prospecting rights coincide with South Africa’s only Marine Stewardship Council accredited fishery, the hake industry.

In South Africa, the fishing industry provides significant socio-economic benefits including jobs, livelihoods and food security benefits and small scale fishers and communities directly depend on healthy marine ecosystems for livelihood and survival. A study conducted by the CER has found that South Africa’s commercial fishing industry employs approximately 27 000 people directly and 100 000 people indirectly, and generates approximately R4 billion in revenue annually. Its total annual catch is estimated to be 427 734 tons with an associated wholesale value of R8.0 billion, according to 2013 information sourced from the Department of Agriculture, Forestry and Fisheries (DAFF).  In the Western Cape, where the prospecting rights are concentrated, the fishing industry contributes approximately 2% to Gross Geographic Product.

In comparison, it’s believed the potential socioeconomic contribution of commercial-scale seabed mining would be marginal. The CER says that the Sandpiper Project, a proposed marine phosphate mining project in Namibia, planned to provide only 150 full-time jobs, while dredging up to 5.5 million tonnes (m.t.) of sediment a year.

A blog called, “Papua New Guinea Mine Watch“, that received more than 50,000 visits in the first nine months, states that, “Exploration isn’t disruptive to the environment. But seabed mining will be. For one thing, it requires underwater harvesters that will suck up those valuable rocks — and any organisms or habitats that get in the way. Some will recover, but others never will: Nodules, which support an abundance of organisms, require millions of years to form. Even worse, the harvesters will kick up huge sediment clouds that could spread over vast areas of the seabed, potentially ravaging corals and sponges. These disruptions might even ricochet through the aquatic food chain. Last year, New Zealand denied a permit to mine the seabed off its coast after the seafood industry argued that it could deposit 45 million tons of sediment into its fisheries each year — fisheries that help feed people around world. The deep sea also plays a crucial role in regulating the climate by serving as a giant carbon sink. Anything that churns up the seafloor has the potential to disturb that sink — with unpredictable consequences.”

For more information on the possible threats of seabed mining and the strategies to address these threats, visit the Safeguard Our Seabed website here: http://cer.org.za/safeguard-our-seabed