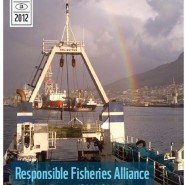 Good progress is being made by an alliance of four major fishing companies and WWF-SA in contributing towards the implementation an Ecosystems Approach to Fisheries management (EAF) and promoting responsible fishing practices.

Some of the key findings outlined, include:

•   Since 2011 more than 200 fishers have undergone training since the RFA adopted this programme (before this about 1000 fishers benefitted from training done by the WWF); and

•    By using the findings derived from the Bird Mitigation Plans (BMPs), the RFA was able to influence the South African Deep Sea Trawling Association (SADSTIA) to lobby government. Subsequently recommendations have been adopted into permit conditions and implemented across the fleet. BMPs have been implemented across all 15 vessel types belonging to RFA members.

Through projects like the Inshore Trawl Bycatch Management Project, the RFA has contributed to the first steps towards understanding and ultimately improving bycatch management in the inshore trawl, which is one of the Marine Stewardship Council conditions for the current certification period. Work done to improve seabird bycatch through the BMPs will also help to address some of the ecosystem challenges related to a number of WWF-SASSI orange-listed species such as kingklip and monk.

According to Francis, it is evident from the review that the RFA has made “a number of telling contributions to implementing an Ecosystems Approach to Fisheries management (EAF) as well as serving as a platform where pertinent environmental issues can be discussed by key industry role players”. According to the review there is consensus between RFA members that the alliance has been successful in adding value to the South African fishing sector and conservation but, in the opinion of stakeholders, less so when assessing the value it has added to government’s operations.

The RFA has been beneficial to the industrial fishing sector in a variety of ways, particularly in its role of providing a platform for discussion between various industry players and environmental NGOs. Prior to the formation of the alliance, such dialogue within and between these role-players was rare. The RFA has therefore created a space where honest discussion about relevant issues can flourish and technical solutions can be sought through research and collaborative efforts. This has elevated environmental awareness within the fishing sector and has spurred those in industry to consider environmental concerns. It has also served to expand and formalise efforts by industry to maintain an environmental agenda.

Stakeholders felt that the RFA’s efforts have resulted in a number of gains for responsible fisheries management in South Africa. The alliance has promoted the sustainability agenda through various projects, most notably through projects such as the Rory Line Implementation Project, the Responsible Fisheries Training Programme, the Inshore Trawl Bycatch Management Project and the development of Bird Mitigation Plans (BMPs), all of which have yielded tangible results.

The RFA’s contribution toward the work of DAFF has been met with mixed feelings, according to the review. A number of stakeholders felt that the RFA is aiding government by grappling with issues necessary to execute an EAF, thus alleviating pressure on government that is typically tasked with the responsibility of tending to issues related to an EAF.

According to the review the RFA has sparked a major shift in the attitudes of those going out to sea and has prompted them to be more inclined to consider the ecosystem concerns in their everyday practices. The programme has facilitated the improved communication between the fishing industry, DAFF staff including  compliance officers and fisheries observers who have also benefitted from the training.

A number of challenges remain for the RFA to effectively achieve its objectives, says Francis. “The biggest challenge, as expressed by the interviewees, is that the RFA is dominated by those with an interest in the hake industry and is therefore criticised for being too focused on issues that are particularly related to that sector. There is therefore a call for the RFA to diversify its interests and ensure that its work addresses a wider range of environmental problems in fisheries other than their own.”

It is largely believed that while RFA projects have resulted in useful recommendations, a lot more can be achieved to effect changes ‘on the water’.

There is also strong concern by many industry stakeholders that the fishing industry is unfairly viewed in a negative light by the public. According to the review the RFA is a tool that can mitigate this perception.

A number of stakeholders have indicated that by showcasing the good work undertaken by the RFA, public perception of the fishing industry can be influenced. Stakeholders believe government can also be lobbied for positive change and that the RFA can help to stimulate the debate on responsible fisheries governance. To date this opportunity, according to the review, has not been sufficiently exploited.

Visit www.rfalliance.org.za for the full report.